meteorites: bits of the solar system that have fallen to earth 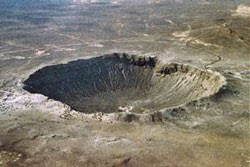 As you stare up into the star-filled sky on almost any moonless night, you will probably see a few meteors every hour. During meteor showers (such as the Leonid shower which occurs each fall) you may see as many as one hundred meteors every hour. Meteor showers can be very impressive. A meteor is a bright streak of light in the sky created when a small meteoroid enters the Earth's atmosphere. Meteors are sometimes called shooting stars or falling stars. Very bright meteors are called fireballs.

Meteorites are bits of the solar system that have fallen to Earth. Most meteorites come from asteroids which have strayed from the asteroid belt located between Earth and Mars. Some have been found that are believed to have come specifically from the 4 Vesta asteroid. Some probably came from comets. A few have been found which came from our Moon and a few are believed to have come from Mars. One famous meteorite, called ALH84001, is believed to show evidence of early life on Mars. Meteorites are very important in scientific research, because they are our only material link to the universe beyond Earth.

Meteorite Types:
[01] Iron: primarily iron and nickel; similar to type M asteroids
[02] Stony iron: mixtures of iron and stony material like type S asteroids
[03] Chondrite: by far the largest number of meteorites fall into this class; similar in composition to the mantles and crusts of the terrestrial planets
[04] Carbonaceous Chondrite: very similar in composition to the Sun less volatiles; similar to type C asteroids
[05] Achondrite: similar to terrestrial basalts; the meteorites believed to have originated on the Moon and Mars are achondrites

The average meteoroid enters the atmosphere at between 10 and 70 km/sec. But all but the very largest are quickly decelerated to a few hundred km/hour by atmospheric friction and hit the Earth's surface with very little fanfare. However meteoroids larger than a few hundred tons are slowed very little; only these large (and fortunately rare) ones make craters.

A good example of what happens when a small asteroid hits the Earth is Barringer Crater (a.k.a. Meteor Crater) near Winslow, Arizona. It was formed about 50,000 years ago by an iron meteor about 30-50 meters in diameter. The crater is 1200 meters in diameter and 200 meters deep. About 120 impact craters have been identified on Earth, so far.

A more recent impact occurred in 1908 in a remote uninhabited region of western Siberia known as Tunguska. The impactor was about 60 meters in diameter and probably consisting of many loosely bound pieces. In contrast to the Barringer Crater event, the Tunguska object completely disintegrated before hitting the ground and so no crater was formed. Nevertheless, all the trees were flattened in an area 50 kilometers across. The sound of the explosion was heard half-way around the world in London.

There are probably at least 1000 asteroids larger than 1 km in diameter that cross the orbit of Earth. One of these hits the Earth about once in a million years or so on the average. Larger ones are less numerous and impacts are less frequent, but they do sometimes happen and with disastrous consequences.

The impact of a comet or asteroid hitting the Earth was probably responsible for the extinction of the dinosaurs 65 million years ago. It left a 180 km crater now buried below the jungle near Chicxulub in the Yucatan Peninsula.

Freshly fallen meteorites and what to do if you find one:
Calculations based on the observed number of asteroids suggest that we should expect about 3 craters 10 km or more across to be formed on the Earth every million years. This is in good agreement with the geologic record. It is more difficult to compute the frequency of larger impacts like Chicxulub but once per 100 million years seems like a reasonable guess.

The most important primitive meteorites are generally those that were observed falling and collected soon after hitting the ground. These samples are particularly useful because they have not been altered by chemical and physical processes (such as rain) that are typical of the Earth's surface.

Freshly-fallen meteorites are usually the easiest to identify, because they are surrounded by a fusion crust produced when the surface of the meteoroid was melted by friction with the Earth's atmosphere. (You may recall that when space capsules or shuttles return to Earth, they are protected by heat shields to prevent the spacecraft from being consumed.). Fusion crusts are usually black or brown. Sometimes they contain flow lines radiating from one end of the meteorite towards the other, indicating the thin skin of melt was being blown backwards. These samples are called oriented meteorites, because we can tell how they were oriented when they fell through the atmosphere.

If you believe you have found a freshly-fallen meteorite, try to photograph the area before removing any specimens. If a meteorite has produced a crater, measure its diameter and depth (some may only be a few centimeters deep). You should also look for multiple meteorite fragments scattered around the area. If you find more than one, try to estimate the distance between the samples.

Hunting for meteorites:
Scientists recently discovered that meteorites have been preserved and concentrated in certain regions of Antarctica. Consequently, within the last 20 years, Japanese and American teams of scientists have collected over 15,000 meteorite specimens from Antarctica, increasing the number of samples in our collections dramatically.

Until the work in Antarctica began, the total number of known meteorites was about 2,600. Of these, only about one-third were observed to fall. Most meteorites are classified as finds and were discovered by farmers, shepherds, ranchers, hikers, and so on. In some cases, however, they were found by diligent meteorite hunters. A few meteorites have also been found in fossiliferous limestones and two were found in rocks collected from the Moon by Apollo astronauts.

If you find a possible meteorite, try to avoid handling the stone. In contrast to some myths, you will not be harmed by touching a meteorite, but you may inadvertently contaminate the sample with salts and oils from your hands. If possible, place the stone in a clean (and dry) plastic bag. Bring the sample to a credible laboratory as soon as possible.

References:
[01] David A. Kring. Meteorites and their properties. Lunar and
Planetary Laboratory. Department of Planetary Sciences. The University
of Arizona. http://meteorites.lpl.arizona.edu/index.html. 27 Feb 2007.
[02] Bill Arnett. Meteors, Meteorites and Impacts. The Nine (8)
Planets. http://seds.lpl.arizona.edu/nineplanets/nineplanets/meteorites.html.
27 Feb 2007.
Posted by argon(one) at 6:17 AM

I found what I think to be a flintrock/stone but my metal detector rang strong on the rock also magnet pulls to it. Any info greatly appreciated.