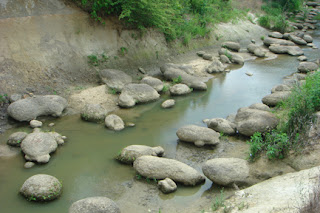 Once or twice a year MAGS members travel to Frankstown, Mississippi to search for sharks' teeth and other vertebrate fossils in the creekbed sand of Twenty Mile Creek.

During the summer of 1990, construction on Highway 45, about seven miles south of Booneville, Prentiss County, in northeastern Mississippi revealed two concentrated fossil beds. One contained an abundance of sharks' teeth and the other an abundance of oyster shells.

The fossils in the Frankstown creekbed are about 75 million years old. These fossils come from the base of the Demopolis Formation, just above the Coffee Sand. The Coffee Sand can be seen in the exposure along Twenty Mile Creek near where Highway 45 crosses it. One interesting aspect of the Coffee Sand is the large boulder-sized concretions that are scattered along the creekbed. I took the picture above on a recent visit to Frankstown. After many visits to this location, I am still fascinated by these structures. Concretions are rounded masses of rock that formed by the cementation of sediments where lime or silica is concentrated in certain layers of ground water. Though the Coffee Sand concretions of Twenty Mile Creek are boulder-like in size and shape, they were not rounded by being rolled along the creek bottom. Rather, they acquired their rounded shape by cementation in place within the formation, and being sculpted by the once-swift currents of Twenty Mile Creek.

Many fossils from the Frankstown site are from groups of animals that died out in a great extinction at the end of the Mesozoic, indicating that the site is no younger than the Cretaceous Period. These animals include the oyster Exogyra, ammonites, some of the sharks (Hybodus, Squalicorax), some of the rays (the sclerorhynchid sawfish), some of the bony fishes, the mosasaurs and the dinosaurs.

The cause of the great extinction at the end of the Cretaceous is believed to have been an asteroid impact which spread a layer of soot across the earth, filling the atmosphere, blocking sunlight and causing plants (and the animals that depended on them) to die. One interesting detail of the great extinction is that not everything died. Gars, turtles, crocodiles, opossums and many others lived on as if nothing had ever happened.