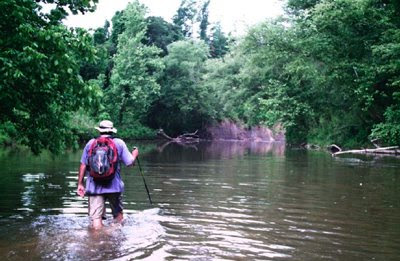 W.C. McDANIEL : The chatter and splashing sounds of five rockhounds hiking down a crystal clear Tennessee creek were abruptly and loudly interrupted by one of those words that brings instant fear and awareness, “SNAKE.” The snake, quickly identified as a “Midland Water Snake,” was cornered and surrounded so it took the quickest and most direct way out, right between the legs of one those rockhounds. Jokes and comments were made and, just as quickly, the eyes and journey returned to the main objective—petrified wood. The visit to this creek was one of many collecting trips made to several sites over the course of the past several months. Those visits and creeks produced more gold medal specimens of petrified wood than Michael Phelps produced gold medals during the summer Olympics.

The following comments describe some of the collecting trips and locations.

Site 1 (Mississippi) – This site was first visited and written about in 2004. That year, and subsequent years, the site consistently produced a large number of pieces, many over 100 pounds. However, in 2008 the finds were limited in size and quantity. In addition, there was evidence other people had been in the area. It needs some good hard rains and a break before returning to the area. No photographs from this site are published.

Site 2 (Mississippi) – This site was first visited and written about in 2004. That year the findings were limited when compared to Site 1. In addition, no follow up visits were made until this year. This year the search area was expanded to about 2 miles up and down the creek from our access point. In addition, our search methods were expanded to include much of the sandy bottom in the middle of creek and extensively probing with metal pointed sticks and listening for the distinct petrified wood clink. The expansion of the search area and methods produced a large number of big and good quality pieces of petrified wood.

Site 3 (Mississippi) – This is a new site and was first explored in late winter. This area, located in the suburbs of Memphis, is a series of small to mid size creeks, some looking like a ditch. One of the nicest things about this location is that you can sleep later, stay later, and still be home by supper time. These sites were remarkable in the number, size, and quality of the collected pieces. Many pieces were located by probing with a metal stick in about 3-4 feet of waist deep muddy water. In many cases you had no idea what you were hauling up until it surfaced. An occasional iron concretion made this task a little more time consuming and at times disappointing. Fortunately there were a lot of good pieces that made this task worthwhile.

Site 4 (Tennessee) – This was a new site for the author but other members of the group had collected at this site. The site, located in West Tennessee, is near where MAGS has collected fossils for many years. The creek was accessed through private property and was one of the smallest creeks searched during the year. The majority of the wood was in the 3-10 pound range with the largest reaching about 25 pounds. In addition this was the only site where fossils were also found, mostly sponge corals.
Posted by argon(one) at 9:54 PM

Hi, I am from eastern wa state and I found a rock in my yard that is really cool looking. It has been cut so it has a smooth side, It looks like the inside of a tree, outside and inside, all around it. The lines are gray, tan and kinda orange. I don't see any fossils in it. I am a beader and rocks are part of the fun This is a cool site I do have a pic or two of this stone. I was able to name another large stone I found as Obsidian, I also have a round lava rock. It's cool finding rocks. Thank you for your site
Michele

I would like to have an item that I found identified. I don't know if it is a piece of petrified wood or an Indian artifact (or both). I found it where the Kiowa Indian tribe lived along the Salt Fork of the Red, North of Wellington, TX. I can send some pics if you could tell me where to send them. This item has a very unusual shape as it looks like a man’s penis. Its measurements are: 2 ¾” long, 1 ¼” wide, 5/8” thick, and weighs 54.6 gms. Also it appears to be anatomically correct with the urethra tube in the middle.

I will greatly appreciate any help you can offer,
Ralph
Knoxville, TN

Why don't you use google translate?

Fantastic blog! A real thorough guide and resource for rocks and fossils.
I don't suppose you would be interested in sharing your blog over at Glipho? We're a new social blogging site with an active, enthusiastic blogging community, many of whom write about science, nature and geology- I bet they would love to read and discuss your work here! You can import any old posts from this existing blog to GLipho quite easily- If you like, take a quick look at http://glipho.com and see what you think!

Thanks for your time, and good luck with future research!

Please add me to your blog. Thank you

Fastidious replies in return of this question with genuine arguments and describing the whole thing regarding that.

Blog is nice and much interesting which engaged me more.Spend a worthful time,keep updating more. Thank you so much.
Columbia River walleye fishing