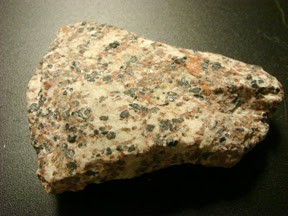 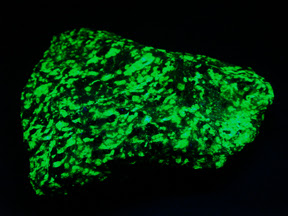 I had an opportunity to travel to Philadelphia at the end of last week on business, and I found it an opportune time to travel north a bit on Saturday to Franklin, New Jersey to one of my favorite places . . . the Franklin Mineral Museum and the fluorescent mineral collecting site directly behind the museum. This was my fourth trip to Franklin and I enjoy it more each time. I was looking for flourescent minerals and I sure found a load of them on Saturday. I just happened to be there on the first day of the collecting season. A week earlier and I would have found the site under snow.

The first rock that I spotted looked different to me. I didn't recall having seen one like it there before, so I held on to it and kept moving it to the top of my bucket each time I placed another rock in the pile to be sorted. My first rock turned out to be a combination of willemite, zincite and franklinite. When I placed it under the short-wave UV light, it fluoresced a bright blue. It is really stunning. I also found several red willemite and several green willemite specimens. I found a piece or two of barite, there were several specimens with just a tinge of yellow fluorescence and one or two with specs of beige. And of course, there was "tons" of calcite brilliantly glowing orange. I have always found the combination of calcite and franklinite to be an attractive-looking specimen. The pictures above are red willemite from my Franklin excursion. The top one in under fluorescent light. The bottom one is under short-wave UV light.

Color and intensity of the fluorescence varies among specimens of a particular mineral. However, specimens from the same locality almost always fluoresce the same color. For example, calcite may fluoresce red, orange, yellow, white or green.

When a fluorescent lamp is lit, never look at the light source, as it can damage the eyes permanently. In addition, skin should not be exposed to the light source for extended periods, as it can cause sunburns and long term skin problems.

We oilfield geologists also use fluorescence to judge the grade or "gravity" of oil on core or chip samples recovered during drilling operations. Heavier oils (thick, tarry oil) fluoresces brown or dull orange. Lighter oils fluoresce progressively "cooler" colors, from light orange, through gold, yellow, white to bright bluish white (try a shot of WD-40 under your fluoroscope). Common long-wave UV lights are sufficient for this sort of testing.

The rocks that I collected last weekend in Franklin, New Jersey arrived yesterday and I had tons of fun sorting them and looking at each one under the UV light. The specimen above is one from my Saturday adventure. It is red willemite. If you look closely in the top picture you can see the red specks throughout the piece. The black specks in the piece are franklinite, which does not fluoresce. I've added a couple of pictures to the original fluorescent post. The top picture is under normal fluorescent light. The bottom picture is under short wave ultraviolet (UV) light. It is interesting that red willemite fluoresces green.

Altogether I collected about 60 specimens Saturday. I could have brought home more, but I wanted to keep the shipping costs down to a reasonable amount. That also gives me an incentive to go back . . . again. Franklin is one of you favorite collecting sites in the country.

Hi! I have a question about a mineral that I picked up in the south of Spain. I think it's a "desert rose" but it's really big and I've never seen another one like it. Is there a way I could send a picture to see if you know what it is?

Can you distinguish a pink sapphire from a pick diamond using a hand held shortwave fluroescent lamp? If so, what should I look for?

I was looking at your website and was looking for someone or somewhere (forum?) to post a question about a certain vintage portable light that I own? The light that I have is a Mineralight V according to the tag on the unit. I have searched google and bing posts to try to find more info on the unit but cant find much of anything. I did find a couple of pictures of what appears to the be the exact same unit that I have, that has the tag Mineralight V43 so that is most likely the same thing, maybe mine is just not stamped with the 43? I am trying to find a user manual or wiring diagram for the unit to troubleshoot with. It was working fine the last time I used it and I cannot seem to get it to do anything now. Thanks for any info or guidance you can offer!