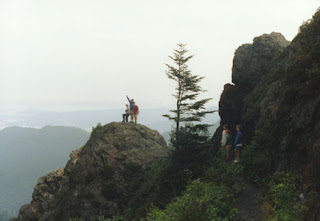 This is a view of Charlie’s Bunion as my Venture Crew and I trekked our way through the Great Smoky Mountains National Park on the Appalachian Trail several years ago. Thunderhead Mountain, Charlie’s Bunion and Sawteeth are my favorite parts of the trail.

Although the Rocky Mountains are taller and the peaks are more jagged, the Appalachian Mountains are the oldest mountains in the United States. Age . . . that’s actually why the Appalachians are smoother and rounder . . . a billion years of erosion. The Great Smoky Mountains are the highest peaks in the Appalachian mountain range. I grew up in the Smokies, and I get back to them as often as I can. When I was a boy growing up in Western North Carolina, I never wondered how the Smokies were formed, I just enjoyed hiking them, sitting on the balds, peering out over the vast expanse of blue and purple mountain tops. Now that I am older I find it fascinating to study the geologic history of the areas in which I hike.

Journey Back
So sit back and enjoy at journey back through time when an ancient sea flooded what is now the eastern United States, submerging the remnants of an old mountain range. The sea slowly deposited layers and layers of sediment onto the ocean floor. The intense pressure of thousands of feet of sediment compressed these layers into metamorphic rock. Almost 300 million years ago, the sea added yet another layer of limestone sediment that was composed of fossilized marine animals and shells. The stage was set for the formation of the Appalachian Mountains. [01]

As a result of the eons-old shifting of the earth's tectonic plates (large sections of the earth's crust), Africa and North America collided about 250 million years ago. This caused the older, underlying layer of metamorphic rock to tilt upward and slide over the younger limestone rock, slowly creating a towering mountain range, the Appalachians. The older rocks, known as the Ocoee Series, now compose most of the Great Smoky Mountains. Charlie’s Bunion (pictured above), Sawteeth and Chimney Tops are dramatic examples of how the rock layers tilted and buckled to form steep cliffs and pinnacles. In Cades Cove, erosion of the overlying metamorphic rock reveals the limestone layer beneath. [01]

During the ice ages, massive boulders were created by alternating freezing and thawing of the rock. You can see boulder fields on the Cove Hardwood, Noah "Bud" Ogle and Roaring Fork Motor Nature Trails. The Smokies originally looked more like the Himalayas than the rounded mountains we see today. The relentless erosive force of water has sculpted their present-day appearance. Water run-off has also helped to carve the alternating pattern of V-shaped valleys and steep ridges. Landslides caused by a torrential downpour in 1951 created the large V-slash on Mount LeConte, and rock slides in 1984 briefly closed Newfound Gap Road. As you explore the park, look for how water continues to sculpt the land. [01]

Basement Complex
Basement Complex, the rocks of the Blue Ridge Mountains, have a crystalline foundation. They extend along the southeastern side of the Great Smoky Mountains and reappear at several places within the mountains where tectonic forces have pushed them up or have thrust them into contact with younger rocks. [02]

The basement complex consists of a wide variety of gneiss and schist, including layered gneiss from sedimentary or volcanic rocks and non-layered granite-based gneiss. The layered gneiss contains various amounts of biotite, muscovite, quartz and feldspar. They also contain small amounts of mica schist and larger amounts of hornblende. The non-layered gneiss is mostly quartz monzonite and granodiorite whose chief minerals are biotite, epidote and magnetite. [02]

The hornblende gneiss of this area may have been part of a volcanic flow, and the granitic rocks which dominate the northwestern part of the Blue Ridge Mountains may have originated partly as magma that invaded the rocks. Rocks of the basement complex date as far back as one billion years with a scattering of rocks as young as 350 million years. [02]

The Ocoee Series can be divided into three groups: Great Smoky Group which forms the main mass of the Great Smoky Mountains; the Snowbird Group occurs in the middle, in the foothills just north of the mountains; and the Walden Creek Group which occurs in the northwest, in the part of the foothills nearest the Appalachian Valley. Characteristic Snowbird outcroppings of Pigeon Siltstone may be seen north of Gatlinburg and characteristics of Roaring Fork Sandstone may be seen southeast of the Great Smoky Mountains park headquarters. [02]

The Great Smoky Group is a thick mass of sedimentary rocks, pebble conglomerate, coarse to find sandstone, and silty rocks, which can be divided into three formations: the fine-grained Elkmont Sandstone below, coarse-grained Thunderhead Sandstone in the middle, and cark sily rocks of the Anakeesta Formation above. Both the Elkmont and Thunderhead Sandstones are gray and composed principally of quartz and potassic feldspar, with a small amount of plagioclase feldspar and light-colored granite and quartizite. The Thunderhead Sandstone may contain blue-tinted quartz grains. The Anakeesta Formation consists mainly of dark silty rocks altered to slate, phyllite or schist. [02]

Sedimentary rocks of the Walden Creek Group form the northern and northwestern parts of the foothills. This group is mostly chale and siltstone, but it includes masses of conglomerate and sandstone, as well as nimor layers of quartzite, limestone and dolomite. [02]

I'm doing a project on the Great Smoky Mts. and we have to have 3 rocks and have what kind of rock it is what makes up the rock and how it got there. what do you think are the three most common rocks that are there because i read everything and there is so many different ones what one is most common?

There are three main groups of rokcs in the Smokies. [01] The billion-year-old gneisses and schists of the southeastern foothills of the park. These rocks were deeply buried, have undergone repeated changes and have been pushed up by mountain-building and exposed by erosion. [02] Most of the Smokies are made up of sandstone, which was probably deposited in a marine trench that existed millions of years ago along the North American continental margin. [03] The last group of rocks are the limestones along the western and northern boundaries of the park. Some of these 500-million-year-old limestones contain fossils such as trilobites and brachiopods. These limestones were exposed as the folds of several ages intersected during the mountain-building process.

I hope this information is helpful. If you have other questions, please leave a comment.

I have found several fossils in one rock that I believe is crystalline. It has holes like pegmatite, but if you follow the fossil 'track', the body seems to go into these holes and out the other side. I live off of Hwy 421, a few miles south of the Blue Ridge Parkway between Boone and N. Wilkesboro, NC. There are also a few gold flakes in the stone. The rocks on my land are mostly pegmatite, granite, mica, quartz, rhodonite and small gold deposits (especially alluvial). I would like to know a local source for more information on the fossil rock. We are near Appalachian State University in Boone, NC. We are also close to the Mineral Museum in Little Switzerland on the parkway. Thank you. Andrea andreattyson@aol.com

Driving along I-75N from GA I saw in passing what looked like granite walls running up one mountain. There were several parallel to each other. I did not get a good look but they caught my interest and I wondered how they were formed. Tried googling this but hardly knew what terms to use. They made me think of the volcanic dike formations in the Big Bend.

Maybe I did not see what I thought I saw :) but had to ask!

The plates you saw are most likely shale, as that is the primary underlying rock in the southern Appalachians. The formation was formed when two plates contacted each other as these mountains were forming. One plate pushed underneath the other, forcing the top plate upward.

hi,
I just came back from the smomies and I have a daughter that has a very strong interest in sharks teeth, can you tell me some of the best spots to find them?

There are several areas that I enjoy searching for sharks' teeth. There are many more but these are my favs:
[01] Venice Beach and beaches south of Venice Beach, Florida
[02] Edisto Island, South Carolina
[03] Amelia Island, Florida
[04] Tybee Island, Georgia
[05] Aurora, North Carolina
[06] Frankstown, Mississippi

Hello I want to congratulate to them by its site of the Web of the excellent looks like entertained and very good very to me it elaborated. I invite them to that they explore a little on my Web site.

I want to know the name of the rock that is native to southern Georgia, and was commonly found in the fields and removed by hand while plowing, and frequently later put to use around old homesteads as borders for flowerbeds, built into culverts, or used as underpinning for houses. The rocks I saw frequently had fossils in them, and they were very rough in texture, not like north Georgia stones which are smooth and more granite-like. I do not know much about rocks, but am interested in learning, starting here at home in s. Georgia. Thanks for any input.

Very interesting article. Your analysis about the geology of this place is very deep and complete. I will read some more of your articles. Buy Viagra Viagra

Im moving to Cosby Tn, and Im curious what the main types of stone the hills in that part of the mountains are made of, and if they are considered the Appalachians?

Hi there. Not sure if you will even see this, as the article is older, but worth a shot! I'm working on a book for kids. Some of the kids enjoy rock hunting. I'm basing it on Burke County NC as they have found diamonds there (kids won't, but it' s an interesting tidbit), and amethysts. There have gold mines there as well, and I thought it seemed like a pretty unique place, in terms of opportunities to find cool stones.

What do the diamonds looking like u found i have a clear stone with rainbow colors and is very clear im new at this ?

Pretty nice post. I just stumbled upon your weblog and wished to say that I've really enjoyed browsing your weblog posts. After all I will be subscribing in your feed and I hope you write again soon!